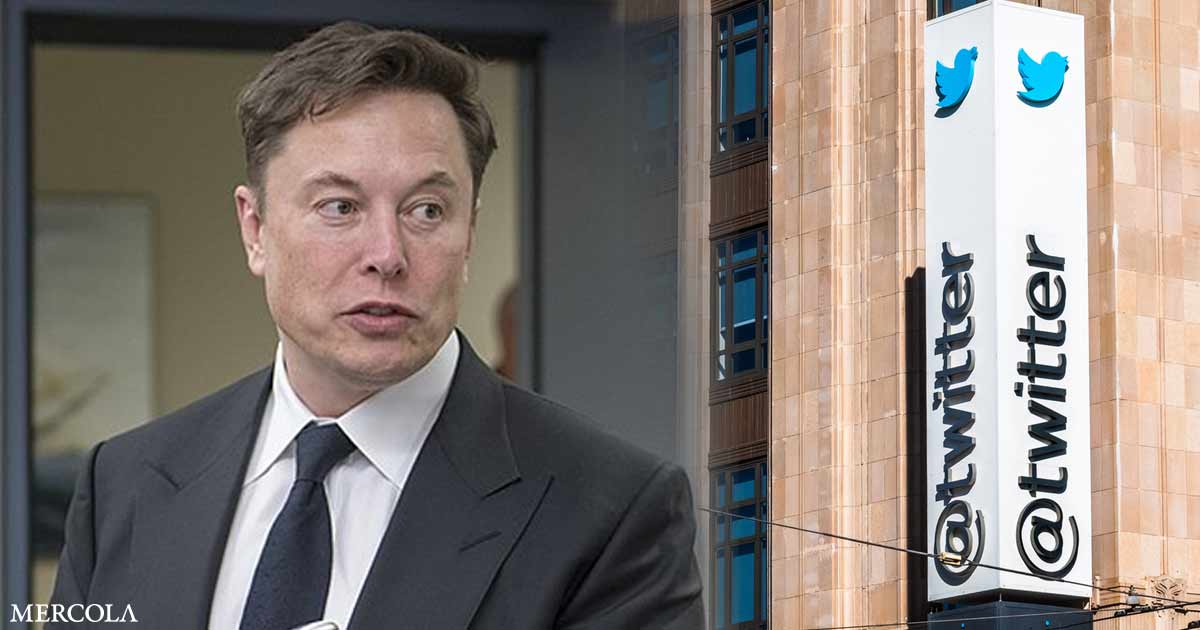 By now you’ve probably heard the big news: Twitter accepted Elon Musk’s buyout offer.1 Musk, a self-described “free speech absolutist” with an “obsession with the truth,”2 has been open about his opinion that Twitter needs to be taken private in order to become a true free-speech platform.

With this buyout, Musk could potentially make that happen. His plans for the platform reportedly include “an edit feature, an open-source algorithm, less moderation, and a higher bar for removing offending tweets,” The Verge reports.3

As reported by Reuters,4 the deal was made after Musk met with a number of shareholders, outlining the specifics of his $ 54.20 share bid. This outreach to the shareholders appears to have force the board of directors’ hand.

Not only do they have a fiduciary responsibility to act in the best interest of shareholders, but they also realized that declining the offer would mean Musk could dump his stock (he already owned 9.1%5), causing the stock price to plummet. According to Reuters:6

April 25, 2022, Musk and Twitter struck a deal for roughly $ 44 billion. It was unanimously approved by the 11-member board. At the completion of the transaction, Twitter will become a privately held company under Musk’s leadership.7 It is reportedly the largest deal to make a company private in the last two decades.8 In a statement announcing the buyout, Musk said:9

“Free speech is the bedrock of a functioning democracy, and Twitter is the digital town square where matters vital to the future of humanity are debated.

I also want to make Twitter better than ever by enhancing the product with new features, making the algorithms open source to increase trust, defeating the spam bots, and authenticating all humans. Twitter has tremendous potential – I look forward to working with the company and the community of users to unlock it. ”

“The billionaire, who has more than 83 million followers on Twitter and has romped across the service hurling gibes and memes, has repeatedly said he wants to ‘transform’ the platform by promoting more free speech and giving users more control over what they see on it. By taking the company private, Mr. Musk could work on the service out of sight of the prying eyes of investors, regulators and others, ” The New York Times noted.10

On the other hand, Musk may in fact use his newfound power to reveal rather than hide. He will have the ability to investigate and expose government and legacy media-directed censorship, for example.

Over the past two years, we’ve seen social media companies working in lockstep to censor certain views, and we’ve already seen evidence that government officials have backdoor channels through which they’ve been instructing companies to censor information on their behalf. It’s not legal, but they’ve been doing it anyway – and getting away with it.

Many are now hoping Musk will unban those who were previously kicked off the platform, although the most famously banned individual, former President Donald Trump, has stated he will not be going back on Twitter, as he has since launched his own social media platform.

But of interest to everyone on this site is that in the summer of 2020, Twitter started falsely labeling Mercola.com links as unsafe and malicious, telling potential readers that my site might steal passwords and other personal data, or install malware on your computer – a tactic that decreased views by about 95%.

This was and is completely false. On the contrary, my site was by then set up to protect all readers from Google’s intrusive data mining. Shortly after that, Twitter banned Mercola links altogether. If you included a link to one of my articles, your post would simply be rejected and not posted.

If Musk acts with integrity, his takeover of Twitter could end up being a true watershed moment in the fight for personal freedom and the freedom of speech.

Time will tell whether Musk will allow all previously banned accounts to be reinstated. Of course, among those accounts are also many other doctors and scientists who have been trying to share information about SARS-CoV-2 and the COVID shots.

If Musk acts with integrity, his takeover of Twitter could end up being a true watershed moment in the fight for personal freedom and the freedom of speech. Big Tech reporter Dan Patterson, interviewed by CBS News in the video above, doesn’t believe Musk is being completely honest about his intentions for Twitter.

Patterson suspects the free-speech talking point is “a red herring,” and that Musk is more interested in gaining influence than protecting free speech. The Washington Post11 appears to second that motion, pointing out that even though Twitter isn’t the most influential platform out there, “politicians, companies and activists often rely on the platform to set the news agenda.”

Perhaps more egregious than censoring and banning any particular individual is the fact that Twitter (and other social media platforms) have censored science itself, which is an incredibly dangerous move.

For example, at the end of April 2021, Twitter censored a peer-reviewed study published in the journal Medical Hypotheses,12 which concluded that masks are ineffective for blocking the viral transmission and can cause substantial adverse physiological and psychological effects.

As noted by The COVID Blog13 at the time, “Twenty-something Twitter employees with Starbucks lattes are now the authorities in law and science versus respected, long-time attorneys who have fought corruption their entire lives.”

As crazy as that is, mainstream media have been all-onboard with the censorship of science, and as noted by investigative journalist Paul Thacker,14 one of the main reasons why media have been so unwilling to call out Big Tech censorship is because the media rely on fake fact checks to support their own lies.

Social media platforms of all kinds have also been seemingly working together, censoring the same information – a fact that suggests some sort of centralized decision-maker. As reported by Thacker:15

“In other examples, Facebook has censored an investigation I wrote for The BMJ that found troubling data integrity problems with Pfizer’s COVID-19 vaccine clinical trial.

That JAMA study found that natural immunity, caused by getting sick with the COVID-19 virus, seems just as effective as a vaccine. In this light, social media companies act as propaganda arms of pharma and denigrate any complex thinking that questions the value of the vaccines that they sell.

Reporters should be opposed to censoring scientific information, but most media – especially that odd species called the science writer – has aligned with the interests of scientists and the fact-checking industry …

Disinformation doesn’t have to be sophisticated when people believe what they read. Once this belief is established, censors ensure that disinformation remains strong, followed by denial that there is censoring. That way inconvenient facts do not mar the chosen story. ”

It’s still too early to say whether Musk’s takeover of Twitter will mark a U-turn towards freedom of speech. I for one hope that’s the case. In the featured CBS News clip, Patterson muddies the waters by claiming that free speech is a nebulous thing that can be interpreted in any number of ways.

This isn’t the case, but we can’t be too surprised. By and large, we’ve seen Republicans and free speech supporters support Musk’s takeover of Twitter, while Democrats have been crying that taking Twitter private poses a “threat to democracy;” that it will open the doors to all manner of “hate speech” and will need close scrutiny.16

However, Musk is absolutely correct in his view that without freedom of speech – the right to speak your mind, even if others think you’re wrong – democracy is nothing but a fantasy. What censorship mavens are calling hate speech is usually nothing but an opposing opinion.

I still remember the days when social media involved being exposed to opinions of all kinds. While there’s a possibility of being “offended,” if you want to live in a free society, you have no choice but to allow opposing views to exist.

May 29, 2022
The Benefits of Physical Therapy for Older Adults