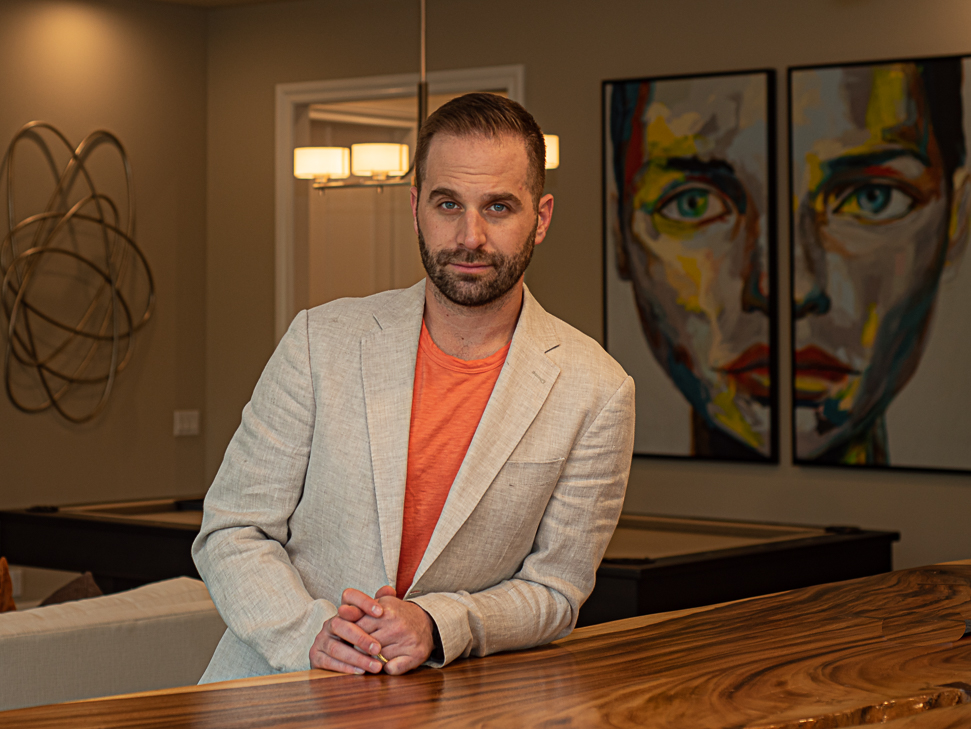 Chad Bronstein is among the most successful entrepreneurs of his generation. In 2021 Bronstein was named to both AdAge’s 40 Under 40 and Crain’s 40 under 40.

He has raised nearly $ 100M for his three companies: Fylloa cannatech startup that now has mainstream tech investors; Tyson 2.0, Mike Tyson’s new cannabis brand; and Wesana, a psychedelics company he took public with NHL player Daniel Carcillo this year to help those with traumatic brain injuries. Chad is a sports enthusiast, but far more than just a spectator, being the manager and agent for Julianna Peña, the reigning UFC Women’s Bantamweight Champion.

Chad makes time daily for family and personal care with 5:30 am workouts. His diet is gluten-free and excludes red meat, along with a steady supplement regimen.

“When I am home, I am on calls all day, but always shut down to have dinner with my wife and son,” he said.

We talked to Chad Bronstein about his various businesses, how they mesh, and the importance of emotional intelligence to success.

Grit Daily: You’re not only the Founder and CEO of Fyllo, but the Co-Founder and Executive Chairman of a psychedelics company, Wesana, and the Chairman of the Board of Mike Tyson’s new cannabis company, Tyson 2.0…. How have you managed to build and run multiple large-scale startups that continue to grow together synergistically?

Chad Bronstein: There are two ‘through-lines’ that have guided my career. The first is putting people first. The second is my ability to take calculated risks into new markets.

Former NHL player and Stanley Cup Champion Daniel Carcillo reached out to me on LinkedIn last year, because he knew about Fyllo, my tech company catering to cannabis, and wanted to start a company that used psychedelics to help those who suffer from mental illness and traumatic brain injury. I instantly connected with Daniel –– after hearing his story about how psychedelics literally saved his life, I was immediately inspired, and knew I had to help him create Wesana Health.

Mike Tyson, meanwhile, was an early investor in Wesana. Mike and I quickly became friends–– and, as I learned more about his passion for cannabis and how it has helped him–– it became clear that there was a business there. Mike was involved with a different cannabis venture at the time, but it didn’t have the right direction. With my entrepreneurial experience and his brand, however, I knew we had a real opportunity to build the first national, celebrity cannabis brand.

I helped Mike dissolve his former business and launch Tyson 2.0, and he has been an unbelievable collaborator every step of the way. To help grow Tyson 2.0, I have been able to tap into my network from Fyllo and Wesana. It all comes together full-circle when you surround yourself with the right people.

GD: It was just announced that Tyson 2.0 has acquired a majority stake in Ric Flair Drip, Inc., the 16 time World Heavyweight Wrestling Champion’s new cannabis venture. How did that come to be and what does that mean for the company going forward?

CB: We always knew that Tyson 2.0 would be a home for other celebrities and high-profile figures who wanted to get into cannabis. For decades, Ric has been synonymous with high-impact, high energy experiences. Similar to how we rolled out Tyson 2.0, Ric Flair cannabis products will reach nationwide distribution through our robust network of industry partners.

GD: I know that building relationships and investing in human capital has played a major role in your career. Can you talk a bit about your approach and philosophy in that area, and why young entrepreneurs should never undervalue emotional intelligence?

CB: No matter what project I am working on, I always put the people first. The right team can mean the difference between success and failure.

The relationships I’ve built and invested in have not only brought new opportunities to me, but have allowed me to scale and run businesses that are able to grow and thrive together organically.

I always think that being a strong entrepreneur is about being both a player and a coach. You want to surround yourself with team members who bring different skill sets, can play different positions and bring different ways of thinking to the game. I always find that executives with strong emotional intelligence become MVPs because of the way they approach relationship building and working with others – whether internal or clients / customers. EQ is absolutely as important to me as IQ.

GD: What motivates you, professionally and personally?

CB: My amazing wife and son, and the incredible team I have drive me. They are a big reason why I am able to accomplish so much, and I truly couldn’t do it without them. For me to be successful it’s important that I carve out family time every single day. My wife has supported and motivated me since day one: We met at 22, and she has pushed me since the very beginning. I am keenly aware of what I do best and what is best to delegate to others to achieve the optimal outcomes, so having a team that I trust is extremely important.

GD: Can you tell us a little more about your involvement with Artists For Artists, Keenan Thompson’s new talent agency and production company?

CB: I recently became a partner in Kenan Thompson‘s new production and talent agency, Artists for Artists, in addition to funding $ 3 million to the company ahead of its launch.

GD: In addition to your business ventures with sports icons Mike Tyson, Ric Flair, and former NHL player Daniel Carcillo (Wesana), you’re also Manager and Agent to UFC World Champion Julianna Peña. Has sports always been a passion of yours, and do you have plans to continue expanding your work in that arena?

One day Julianna and I were discussing how female athletes were under-represented in fighting. I knew that combining my business acumen with my deep brand relationships cultivated over 15 years working in advertising, I could bring new opportunities to her– and increased visibility to female athletes in flighting by extension. Through my relationships, I have been able to get Julianna in front of many leading brands so that they get to know her as an athlete and as a person. Most of the time, an athlete has minimal exposure to a brand before an endorsement deal is done. We have taken a very different approach to how deals are typically handled.

Will Julianna be the last athlete I represent? I have learned never to say never!

GD: What is your advice to young entrepreneurs looking to take the leap and start their businesses?

CB: Start. Just take the first step. Starting small is better than not starting at all. There is no better feeling that taking an idea and making it come to life.