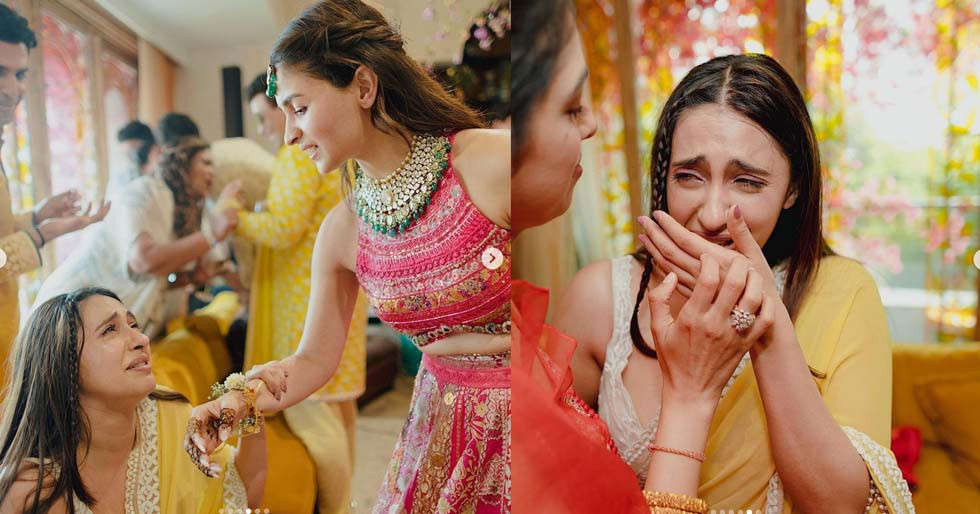 Unless you’re living under a rock, you’ve probably been obsessed with Alia Bhatt and Ranbir Kapoor’s wedding. The couple tied in the knot on April 14 and fans have not recovered from just how cute the ceremony was ever since. While we’ve seen the fairytale-like photos shared by the bride herself, a member of the bride squad has shared fresh photos. Alia’s’ best friend Akansha Rajan Kapoor has now dropped previously unseen photos from the Mehendi ceremony.

The Mehendi ceremony ahead of Alia Bhatt and Ranbir Kapoor’s wedding had several highlights. Added to those are photos of Akansha Rajan Kapoor crying happy tears at her BFF’s event. On Saturday, she took to Instagram to share unfiltered emotional pictures from the pre-wedding ceremony. Her post sees her smiling in a pretty yellow saree and quickly turns into a feel-fest as she can be seen crying while Karan Johar and Alia tried consoling her.

She shared the photo dump with the caption, “The (de) escalation of ARK’s emotions at every wedding, ever,” aptly summing up the pictures from Alia and Ranbir’s Mehendi. While it has been two weeks since the couple got hitched up, fans are still reeling from all the emotions.

Alia Bhatt and Ranbir Kapoor got married in an intimate ceremony at their Bandra home. The guest list was limited to their closest friends and family. Among the attendees were Kareena Kapoor, Karisma Kapoor, Saif Ali Khan, Karan Johar, Ayan Mukerji and more. Alia and Ranbir will soon share screen space in Brahmastra. The film which also features Amitabh Bachchan, Mouni Roy and more will be released on September 9.