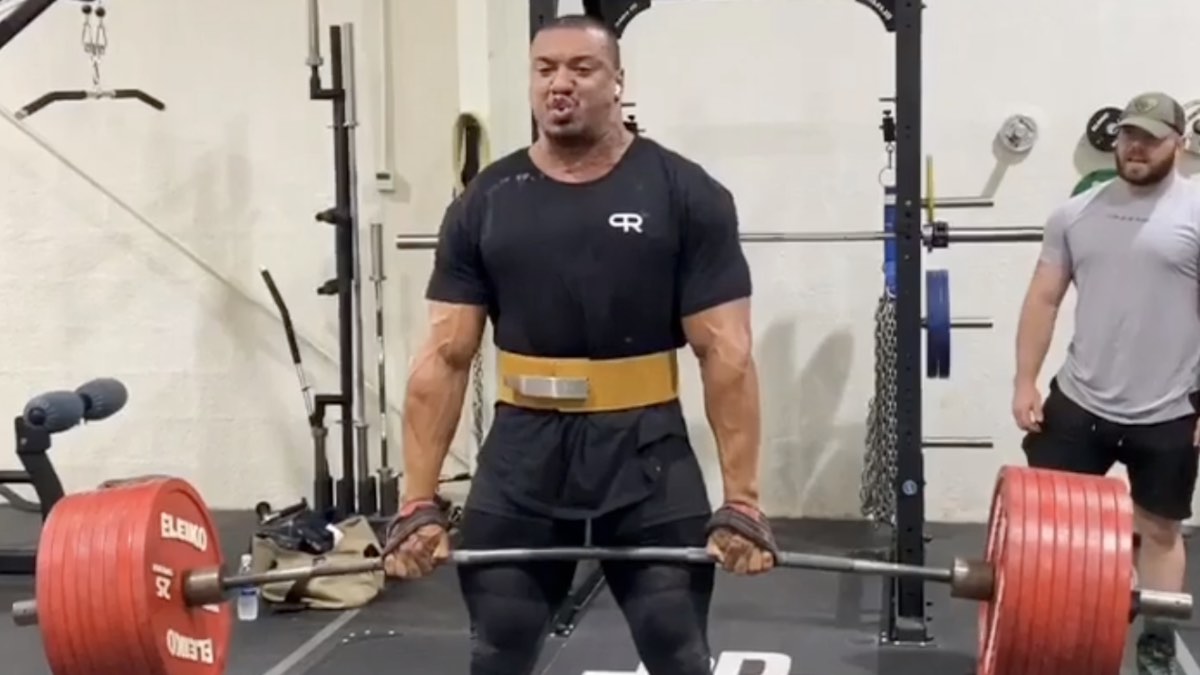 On May 3, 2022, Larry “Wheels” Williams showed why he is one of the most prominent names in strength sports when he deadlifted 425 kilograms (937 pounds) during a training session.

For the pull, Wheels was barefoot, and he wore a lifting belt and wrist wraps. It could be a precursor to a strong performance for him during the 2022 Middle East’s Strongest Man (MESM).

[Related: How To Do The Deadlift For Strength And Muscle]

Wheels’ caption in the post lists the deadlift’s weight as “425 kilograms / 925 pounds.” That might be a mistake as 425 kilograms equates to 937 pounds. The eight respectively 25-kilogram plates on both ends of his barbell would add up to 425 kilograms. Whether Wheels made a minor typo or mistakenly thought he was lifting roughly 12 pounds less is unconfirmed at the time of this writing, but the pull remains stellar.

This display of deadlift strength signifies how far Wheels has come with his progression. The athlete did notch a pull of 425 kilograms in July 2020, but that was a full equipment lift. The distinction between pulling raw and doing it while wearing a lifting suit can be sharp. It’s a testament to Wheels’ recent gains that he can capture the same deadlift weight but raw.

Wheels has not participated in a powerlifting competition since mid-2020, and the 2022 MESM in late August will mark his return.

If Wheels were to transfer this 425-kilogram pull to the sanctioned meet, it would eclipse his best-ever mark of 402.8 kilograms (881.8 pounds) from his last meet – the 2020 Xtreme Powerlifting Coalition (XPC) – by over 65 kilograms (29.4 pounds). He could potentially even become the latest member of the 1,000-pound deadlift club.

Wheels at a Glance

Wheels has notoriety in the strength sports sphere for a variety of reasons. In addition to his YouTube channel (which has over 2.3 million subscribers at the time of publishing), Wheels has shown off his versatility and dipped his toes professionally as a powerlifter, strongmanand bodybuilder.

Aside from his competitive ventures, in recent news, Wheels was a noteworthy part of the rivalry between 2017 World’s Strongest Man (WSM) Champion Eddie Hall and 2018 WSM Champion Hafthor Björnsson.

With Wheels making a return to a formal powerlifting platform soon, here are some of the more notable results of his career:

The Middle East Strongest Man Is Up Next

Wheels has not confirmed his weight class for the 2022 MESM. He did lift as part of the 120-kilogram-plus in the 2020 XPC, but that was over two years ago. Whether he will still compete in that same weight class this summer is unclear.

What Wheels will achieve during his first powerlifting competition in more than a couple of years is impossible to predict in advance. Though, if he’s casually deadlifting over 65 pounds over his all-time competition best, the sky could be the limit.