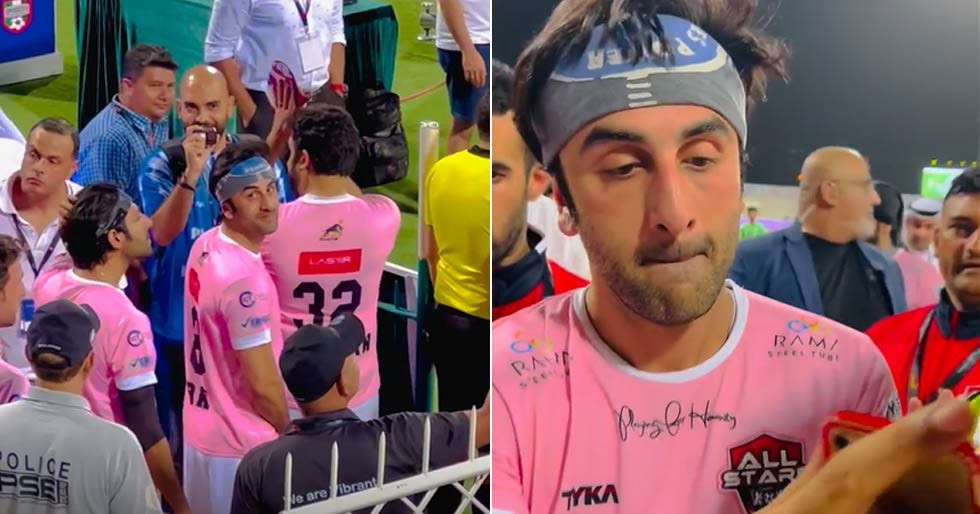 We know that Ranbir Kapoor is a scene-stealer on the big screen, but he’s quite the heartstopper off-screen as well The actor has been making headlines for his appearances lately including his recent football stint. The star joined a bunch of Bollywood celebrities to play at the Celebrity Football Cup 2022 in Dubai against Emirates United. He is a member of the All Star Football Club (ASFC) alongside Abhishek Bachchan, Kartik Aaryan and more. A video from the match has now gone viral on social media.

Ranbir Kapoor was gearing up to enter the field when a fan who was recording a video shouted, “Ranbir, I love you.” To this, Ranbir responded by turning around and winking at the fan. Unsurprisingly, it sent the crowd squealing. Luckily for us, the actor’s adorable wink was caught on camera. Check out the video here:


Fans can’t get enough of just how cute Ranbir is and soon enough comments hailing the star poured in. Another video shared by a fan account has also been doing the rounds of the internet. In it, Ranbir can be seen clicking selfies with fans.


Earlier, Ranbir was clicked alongside his teammates heading to Dubai for the football match.

Ranbir Kapoor was last seen in Sanju and is currently gearing up for the release of his upcoming film Brahmastra in which he stars alongside his wife Alia Bhatt. The Ayan Mukerji directorial which also stars Amitabh Bachchan is a fantasy adventure arriving in cinemas on September 9 this year.