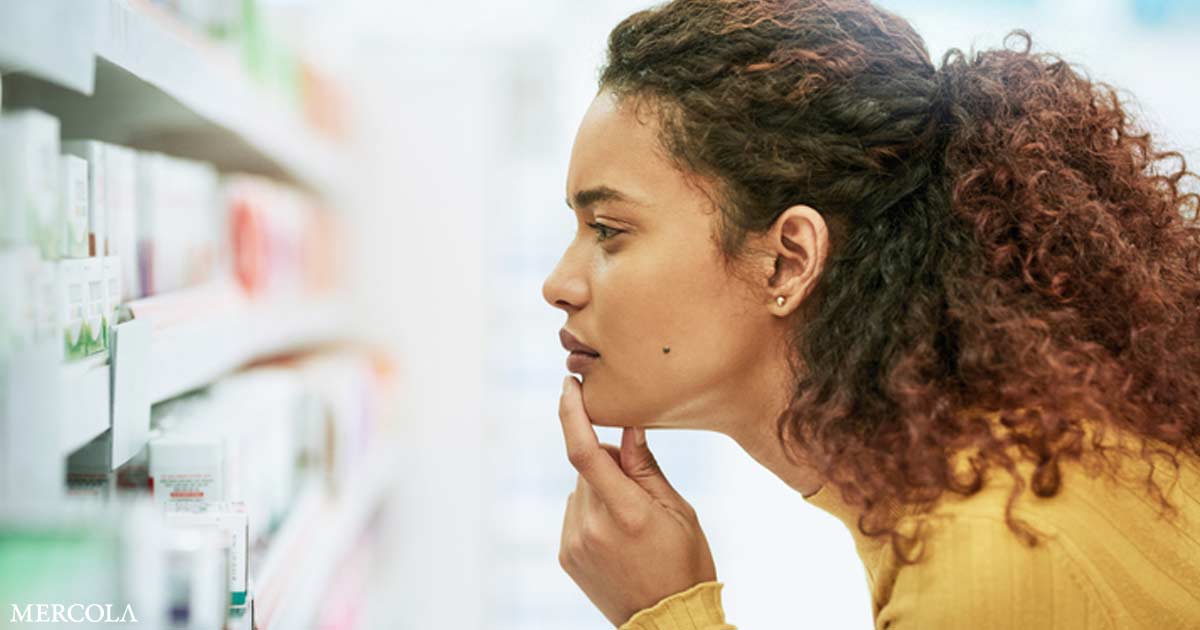 Television advertisements for prescription drugs are illegal in virtually every country on the planet – but not in the US, where 80 such ads air, on average, every hour on Americans’ televisions.1 “Ask your doctor,” the narrators tell viewers, urging them to bring up the latest name-brand drugs at their next physician’s visit.

Prior to the 1980s, these types of direct-to-consumer (DTC) ads were unheard of,2 even in the US, but within a few decades they became among the most common public health messages seen by Americans.

This marketing shift turned out to be incredibly lucrative for Big Pharma, but its effects on public health – and individual health – are highly questionable, as the ads continue to drive consumers to request drugs from their doctors,3 whether they need them or not.

Before the 1980s, pharmaceutical companies marketed directly to doctors, instead of to patients. Drug industry executives even told Congress at the time that they believed directly advertising drugs to consumers was not “in public health interest” and “cannot be safely be accomplished.”4

A cultural shift soon emerged, however, to empower patients to be more involved in their own health care, instead of solely listening to their doctors. Advertisers jumped on the trend but, still, drug advertisements to consumers only appeared in print ads, including in magazines, but not on TV.

This was due to the US FDA’s requirements to include all drug risks and side effects in the ads, which could be done on print pages but was much more difficult to accomplish on TV or radio commercials.

A strange loophole existed, however, which allowed drug ads to run without stating the risks and side effects, as long as it also did not mention the disease the drug was intended to treat.5 This is highly likely related to the industry finally capturing the federal regulatory agencies responsible for protecting the public.

Not surprisingly, this led to confusion, prompting a loosened requirement from the FDA in 1997, which stated that ads only had to include the drug’s “major” side effects and refer viewers to a source where they could find the rest.

Even if viewers do end up seeking out the full list of side effects, the info seldom scares patients away. Everything is designed to make you tune out the risks and view the drug in a desirable light, from actors who use an appealing voice tone to beautiful images and music choices.

The removal of the requirement to list all drug side effects in ads paved the way for on-air drug ads, and the rest is history. By 2004, annual spending on drug advertisements quadrupled,6 making name-brand drugs like Lipitor, Lunesta, Xanax and Ambien household names.

By 2003, US DTC advertising of prescription drugs had reached $ 3.2 billion.7 For comparison, it reached $ 6.58 billion in 2020, excluding social media.8 The profound way it influenced patients was recognized from the start, with critics stating that the ads led to over-prescribing of “unnecessary, expensive and potentially harmful medications.”9

By 2005, a randomized controlled trial had been published in JAMA to determine the influence of patients’ requests for directly advertised drugs, in this case antidepressants.10 Patient actors visited physicians, describing symptoms of depression in half of the visits and in the other half stating “they were feeling down,” a description of an adjustment disorder that does not typically require immediate drug treatment.11

In some of the visits, the patients mentioned seeing a commercial for the antidepressant Paxil, while in others they did not mention any medications. Patients who mentioned Paxil were more likely to be referred for a mental health consultation and receive a prescription for an antidepressant, whether they were describing symptoms of depression or simply “feeling down.”

According to study author Dr. Richard Kravitz, “For us, it typified the double-edged sword which direct-to-consumer advertising represents.”12 Prescribing rates for drugs were highest when patients made general requests for medications – 76% of such visits resulted in a prescription, compared with 31% of those in which the patient made no medication request.13

DTC drug ads are getting “smarter” as the years go by, and now marketers are using targeted ads driven by your viewing habits, which are streamed directly to you via your smart TV. DeepIntent, a health care advertising technology company “built to influence patient health and business outcomes,”14 conducted research on consumer behaviors and ad-supported content.

The majority of “connected TV” (CTV), or smart TV, viewers (64%) said they would rather watch ads than pay more to view the content. DeepIntent surveyed 2,900 US adults on self-reported viewing habits and compared it to data gleaned using “automated content recognition (ACR) technology,” which was developed in partnership with LG Ads Solutions, a provider of native ads to LG smart TVs along with “ audience targeting data. ”15

Their first finding was that while many people believe they’re watching TV via cable or satellite box, most are actually streaming the content via their smart TV – “meaning that more than half of viewers may be watching CTV content without even realizing it,” DeepIntent explained.16

The implication is that they have a greater number of viewers than previously realized to target with their ad campaigns, via not only smart TVs but other devices like your desktop computer and smartphone. According to DeepIntent, doing so is known to influence patient outcomes:17

“DeepIntent… announced its complete integration with LG Ads Solutions’ real-time ACR data repository covering more than 30 million LG smart TVs in the United States. DeepIntent is the first and only demand side platform (DSP) with this capability, offering healthcare marketers unparalleled targeting capabilities for all digital formats, including CTV, desktop, and mobile.

27% Asked Their Doctor About a Drug From an Ad

DeepIntent’s research findings revealed that 30% of people said pharmaceutical ads provide helpful information to someone in their household, and 27% spoke to their doctor about a medical treatment after they learned about it from an ad.18

The findings support earlier data from the company, which found that “pharmaceutical ads can empower patients to take a more active role in researching treatments” and “advertising influences patients’ decision to follow through in taking drugs prescribed by their doctors.”19

The most common action that people take after viewing a drug ad is to conduct research, and this research becomes the most important factor in medication adherence – even more than the person’s own previous experience taking the drug. They intend to use targeted ads to increase drug sales even more. DeepIntent CEO Chris Paquette said in a news release, “We have evidence that more relevant advertising drives real results for our clients.”20

Through their partnership with LG Ads Solutions, DeepIntent is using native ads to drive more sales. Another tactic is native content, also known as sponsored content or branded content, which is written by marketers but passes as real journalism. The sponsored content is a media response to banner ads that are widely ignored, ad blocking technology and readers’ almost universal dislike of pop-ups and screen takeovers.

It also fills webpages without the need to pay writers – instead, sponsors pay the media on whose site or in whose publication the content appears. Some of the content is innocuous and even amusing, but other native content like “Could Statins Cut Alzheimer’s Risk?” found on WebMD21 or “How Testosterone Benefits Your Body” is unabashed Pharma marketing masquerading as unbiased information.

The marketing of prescription drugs, health services, laboratory tests and even disease awareness is big business in the US, and spending has been on a steady uphill climb since 1997. That year, spending on medical marketing was $ 17.7 billion, which rose to $ 29.9 billion in 2016.22

DTC spending increased the most rapidly, from 11.9% of total spending to 32%. DTC prescription drug ads accounted for $ 6 billion in spending alone in 2016, which amounted to 4.6 million ads, including 663,000 television commercials, mostly for high-cost biologics and cancer immunotherapies.

Disease awareness campaigns are another type of marketing campaign run by pharmaceutical companies geared at diseases treated by their drugs. Such campaigns rose in numbers from 44 in 1997 to 401 in 2016, with spending increasing from $ 177 million to $ 430 million over the same period.

Aside from DTC advertising, Big Pharma is still marketing directly to health professionals – an area that accounted for the most professional spending, according to a JAMA study on medical marketing in the US24

“Pharmaceutical marketing to health professionals accounted for most spending and remains high even with new policies to limit industry influence,” the researchers, from The Dartmouth Institute’s Center for Medicine in the Media, noted. “Despite the increase in marketing over 20 years, regulatory oversight remains limited.”25

Annual lobbying on pharmaceuticals and health products has been on the rise since 2013,26 and in 2021 the pharmaceutical industry was the top lobbying group in Washington, spending far more than any other industry – $ 356.6 million.27 Among their top priorities in 2019 was fiercely opposing a bill that would reduce drug costs,28 and, another eye-opening statistic – nearly 60% of Big Pharma’s lobbyists are former government employees.29

So, when you see an advertisement for a drug on TV or your computer, resist the urge to believe that it’s there to help you and see it for what it really is – a marketing tactic with the sole purpose of increasing sales for the drug industry .

June 26, 2022
Patrick Wood – It’s Now Crucial to Understand What We’re Up Against

June 26, 2022
Patrick Wood – It’s Now Crucial to Understand What We’re Up Against